These are the most expensive cosmetic items in Dota 2

Valve’s multiplayer titles have spawned unique in-game economies featuring rare and expensive items. Dota 2 is at the top of this list, featuring several cosmetics that fetch top dollar on the market.

The game has long encouraged players to customize their favorite heroes, and players are willing to throw down a lot of money on some rare skins.

Over the years, several items have become highly sought after, which has driven up their prices to an incredible degree. Here are some of the most expensive items in Dota 2.

How to determine the most expensive Dota 2 items

Dota 2 has a somewhat unique economy from other Valve titles. Unlike Team Fortress 2 or Counter-Strike: Global Offensive, Dota 2 has introduced a slew of limited-time item qualities to create a number of one-of-a-kind rare items. There have also been many different bundles and tools that have been discontinued, leaving many items that are impossible to obtain today.

Very few of these items carry an especially high price tag, however. The sheer number of incredibly rare items has completely killed the market, and while some of these items can be worth hundreds of dollars, there are so few that have been sold so infrequently that it’s difficult to assign a definite value to them.

This article will focus on items that could be purchased or unboxed, rather than various oddities.

Most Dota 2 fans are aware of the Dragonclaw Hook. The item has long been among the most highly demanded items in Dota 2 and has become infamous for being the centerpiece of a countless number of phishing schemes over the years.

It’s no secret what made the item so popular. Pudge is the most popular hero in all of Dota 2 at almost every skill level, making any premium cosmetic item for him more expensive than the average. The Dragonclaw Hook is also one of the most identifiable cosmetics in all of Dota 2, making Pudge’s already large hook even bigger and making it look even more jagged and bright. It also turns the chains that run down his arm into spinal columns, making the item more detailed than most.

The item is an absolute classic at this point. First getting released in 2012, it has been a popular item since its debut. Though it long hovered between $150 and $200, demand for the item skyrocketed to the point where it was selling for around $1,000. Things settled down recently, but Dragonclaw Hooks still cost between $800 and $850.

These eye-catching Anti-Mage weapons were the Extremely Rare drop for the Immortal Treasure II in the battle pass for The International 2015. The cosmetic is designed to look like the Skull Basher item in the game, and features a number of unique animations for Mana Void, Mana Break, and even bashes for when the player actually buys the Skull Basher. Combined with an ambient effect and alternate death animation, the Golden Basher Blades is one of the most elaborate items in Dota 2.

There are a number of different caveats with this item, however. The Golden Basher Blades item is a bundle and must be kept intact to be of any serious value. Once the bundle is opened, it gives the player two Basher of Mage Skulls weapons for the main hand and off-hand, which are worth less than $10 each.

Additionally, the bundle has been released in numerous quantities. The Corrupted version of the item sells for around $200, while the Inscribed quality sees this price drop down to just $40.

A default quality version of the item still in its bundle sells for between $750 and $800.

The Imperial Flame Swords Pack came from a unique concept in Dota 2, with the items being exclusively available to Korean players that played on Nexon servers. Given Dota 2’s lack of popularity in South Korea compared to rival MOBA League of Legends, it’s likely no surprise that this item wound up becoming extremely rare and extremely valuable as a result.

Determining the price for the Imperial Flame Swords pack is difficult because it has not been sold for a considerable length of time. The two swords it contains have each been sold for over $500, which likely means the price tag for the unopened bundle is likely well over $1,000. 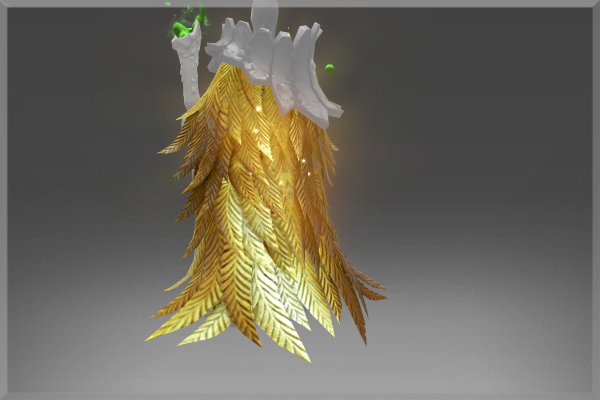 During the Valve major era, the publisher released battle passes for the events in the same way it did for The International. The Fall Season Compendium 2015 was released to promote The Frankfurt Major and it featured a number of eye-catching items. Rubick’s Ornithomancer Mantle was foremost among them, but the extremely rare Golden Ornithomancer Mantle stands out for its absurd price tag of over $1,500.

While Rubick stands out based on his distinctly green ensemble, the Golden Ornithomancer Mantle changes that by turning his body-length cape a gold color with a distinct particle effect. The item actually clashes with most other Rubick cosmetics, making it potentially unappealing visually. But it is flashy, and there are few better ways to show off one’s bank account in Dota 2. 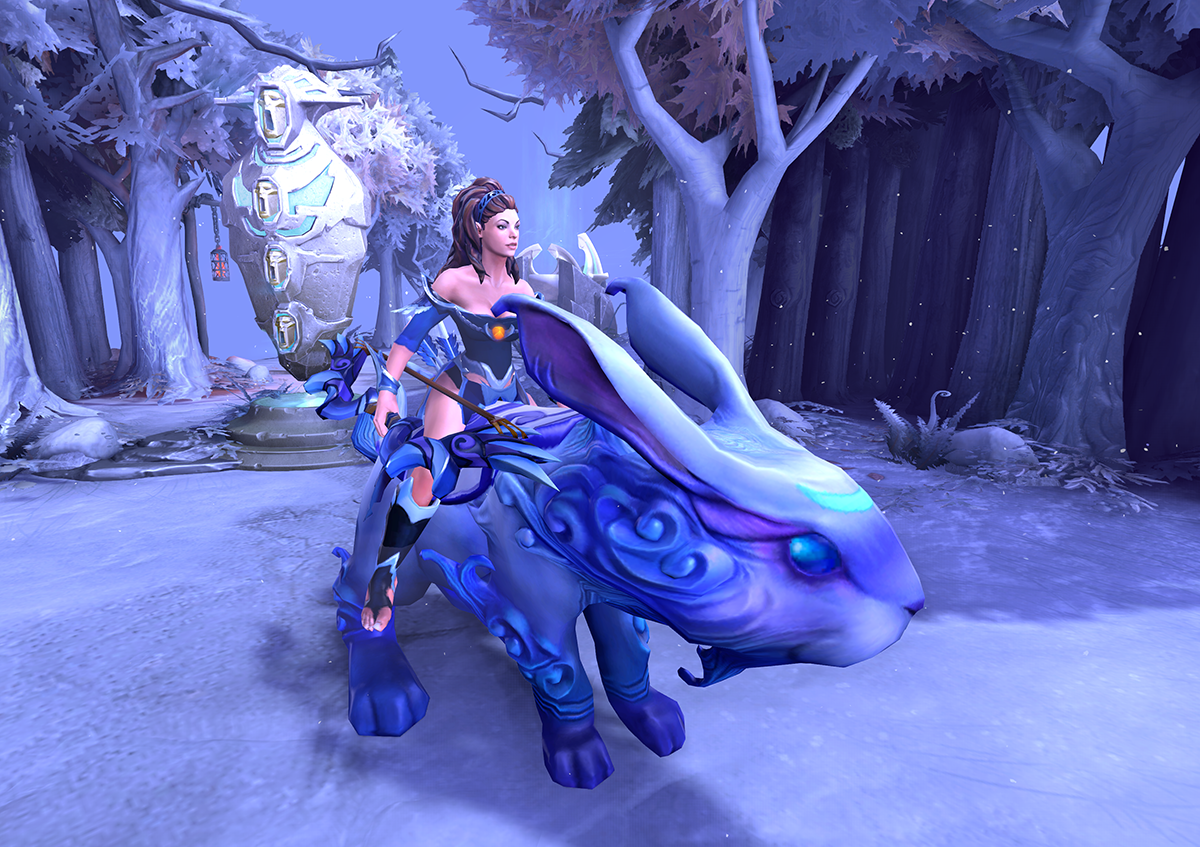 Genuine Tsukumo the Moon Cloud was pack-in for Mirana statue

Dota 2 has had some really impressive merch over the years and many of those items have had in-game promotional items attached to them. In 2017, Artgerm released a limited edition Mirana statue that cost hundreds of dollars. Included with it was a promotional code for Tsukumo the Moon Cloud, a Mirana mount that could only be obtained by purchasing the statue.

The mount isn’t especially great to look at up close. It has two forms and its custom animations are actually shared with other Mirana mounts.

Despite this, the high price tag of the statue made this a valuable item right from the start, and that price didn’t go down with time. A Genuine Tsukumo the Moon Cloud will fetch anywhere from $750 to $1,200 today.

Axe’s Genuine Axe of Phractos is another pricey promotional item

Much like Tsukumo the Moon Cloud, the Axe of Phractos was only obtainable by purchasing a very expensive statue. Also much like Tsukumo, this cosmetic isn’t especially great to look at.

The item came out all the way back in 2013 and is generally underwhelming compared to many modern Axe items. It has an ambient effect where the edges of the axe are smoldering and a unique Counter Helix animation that utilizes this ambient effect. That was nice at the time, but there have been many more impressive weapons for Axe in the years since.

The Axe of Phractos still commands a high price tag due to its notoriety and scarcity. It regularly sells for over $1,000, and has peaked up over $1,700 in the past.

Desert Sands Baby Roshan is most expensive of its kind

Extremely rare Baby Roshan couriers have been a staple of Dota 2’s in-game events for years now and they have fetched a wide range of prices. The Honey Heist Baby Roshan, which was available during The International 2019 battle pass, is the cheapest but still commands over $500. The most expensive is the Desert Sands Baby Roshan, which has consistently sold for between $1,700 and $1,800.

The Alpine Stalker set has a unique history. The cowboy-themed Ursa cosmetics were made available in Dota 2’s in-game store in 2012 but were quickly taken down when Dota 2 fans raged against the novelty set and the fact it didn’t fit into Dota 2’s overall aesthetic. Those gripes were valid at the time, but fans that pounced on the cosmetic item were rewarded as the set exploded in value.

That would have made the item extremely rare on its own, but the fact that many of those who purchased the item unpacked the bundle shortly after purchasing it made the intact set extraordinarily rare and expensive. The individual pieces of the bundle range in price from $50 to $550.

The untouched bundle has sold on the Steam marketplace just three times, with the most recent going for $1,200. It is unclear how many of these sets exist, but their extreme rarity and unique story means that their price will likely hold for the foreseeable future.

These are the best ways to organize your CSGO inventory

The best way to build your CSGO loadout on a budget

How many League of Legends skins are there in 2021?

How to counter Tinker, the teleporting terror of Patch 7.30

OG adds Misha as head coach for The International 2021

Why did Team Nigma and Galaxy Racer merge into Nigma Galaxy?

New Dota 2 hero and Mirana model may come after TI10

The betting dark horses to watch at The International 10