Garen and Yuumi are an unexpected bottom lane duo that has recently taken over the competitive League of Legends scene.

It was first played by Fnatic in the LEC Summer split and it quickly spread through the rest of the world’s regions. Similar to Sona and Taric, this new duo is hard to kill, which leads to a lot of frustration for the enemy team.

Casual players would look at this duo and consider it a troll pick until they end up carrying the game. It is a common misconception that Garen and Yuumi are not viable at lower ranks. On the contrary, playing Garen and Yuumi is one of the best ways to get an easy win and free LP for players at Gold ranks and below.

How to make Garen and Yuumi work in solo queue?

Playing Garen and Yuumi in solo queue requires more teamwork than usual. The players need to understand each other and be open to following each other’s leads. This is not the classic bottom lane duo where the carry jumps into danger only after the support initiates.

Runes and builds for Garen and Yuumi

Garen will pick runes similar to the ones he would use in the top lane with Flash and Teleport as summoner spells. Yuumi’s runes should prioritize mana regeneration and damage. Yuumi doesn’t take Flash, as instead she takes Heal and Ignite. Because the champion is constantly attached to an ally, Yuumi doesn’t buy boots, so she must prioritize her other items. The downside is that once her allies are dead, she will likely die too.

Builds for Garen will take a different path. The first purchase will be Relic Shield and two potions. Taking the support item will guarantee extra gold for Yuumi, who needs as much gold as possible early as it also provides extra vision control for the team. 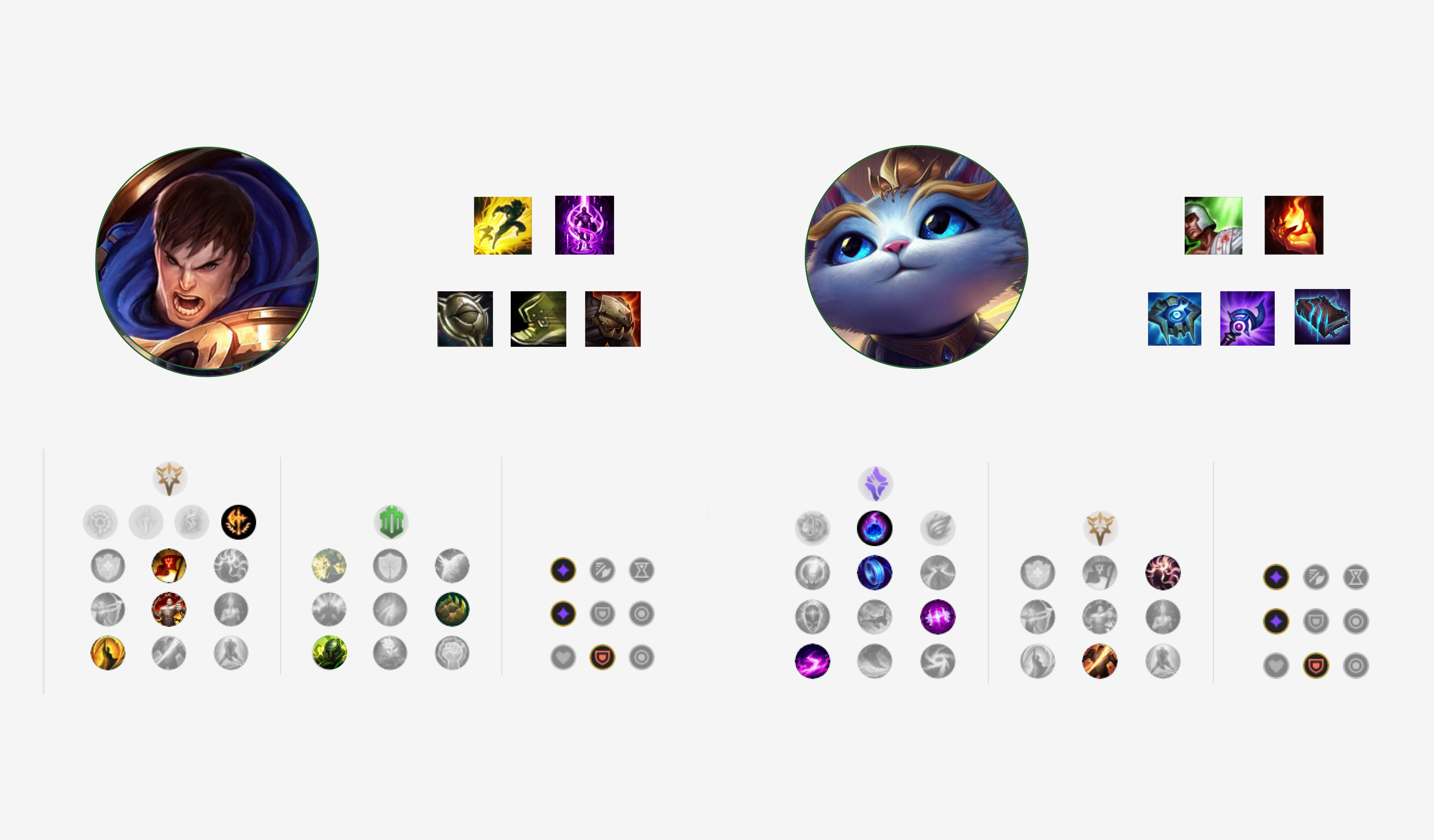 The core build for Garen is Remnant of the Aspect, Ninja Tabi, and Dead Man’s Plate. Once those three items are completed, Garen can opt for more Armor and Magic Resistance, or for more damage, depending on the situation.

Yuumi’s core build includes Remnant of the Watchers, Luden’s Echo, and Morellonomicon. This is an expensive build that provides ability power and magic penetration. Once Yuumi completes her core items, she will need more AP and additional magic penetration. It is not a classic support build since this duo is not intended to function in the traditional way.

Playing Garen and Yuumi in lane

Garen and Yuumi are not made for early skirmishes. Before level six, the duo must stay conservative in lane and farm with Yuumi poking at the enemy. Unless the duo gets a visit from the jungler or the enemy duo overextends, Garen and Yuumi shouldn’t look for fights in their early levels.

Once both champions reach level six, they can start creating their own opportunities for kills. This is a self-sufficient duo that can initiate fights and win without additional help from the other lanes. Yuumi needs to complete at least Luden’s Echo before her damage truly comes online.

As the game progresses, Garen will only get tanker and Yuumi will hit harder.

Queue up with a friend and give this duo a shot, but you might want to apologize to your opponents afterwards.

This is how to counter Garen in LoL solo queue games

The best champions to climb solo queue on LoL patch 11.18