FlyQuest has released Kim “Wadid” Bae-in from the organization’s League of Legends roster.

FlyQuest confirmed Wadid’s release on Twitter, thanking him for the time he spent with the team and wishing him success in his future endeavors.

Soon after, Wadid followed up with a Tweet announcing that he is a free agent for the first time since the beginning of his professional career. He’s looking to return to action and is open to competing in any region. 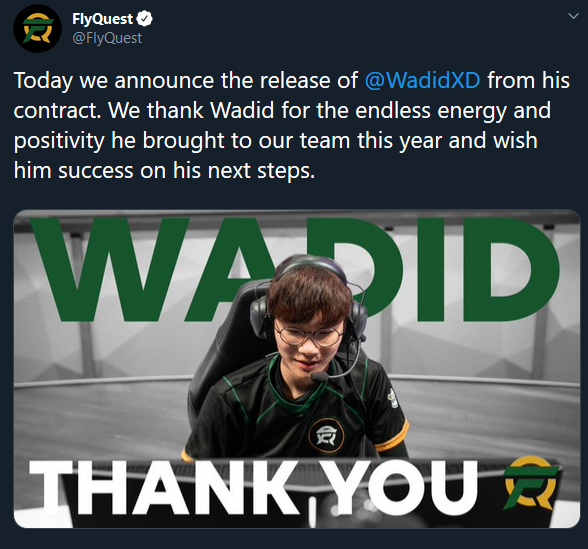 Wadid later added a video sharing his thoughts on the situation.

“I want to thank all FlyQuest staff and players because they were fully supportive of me and made it comfortable to perform,” Wadid said. “I was really happy to be there, but we just had a different idea about the future, so that’s why we decided to part ways.”

Wadid called his 2019 season a failure compared to the prior year, but added he learned a lot from the experience. He states he is ready to improve and do whatever it takes to help his new team win. He also thanked his fans for their support, saying they’re the reason he keeps playing.

Wadid was a part of the G2 Esports roster that made it to the 2018 League of Legends World Championship semifinals. He was acquired by Rogue in the following season, but decided to leave the LoL European Championship after an unsatisfying performance. He eventually joined FlyQuest’s academy team, believing it was a chance to prove himself. It was also Wadid’s first venture to the North American scene.

He was promoted to FlyQuest's main roster, but the organization struggled throughout the year. It finished the 2019 LCS Summer Split in ninth place and fell well short of qualifying for the 2019 League of Legends World Championship.

Wadid’s fans have been supportive nonetheless, saying they will follow him and cheer for him no matter which region he plays in next.

Kold retires from professional play, looking to become a coach

Former Splyce and Origen jungler Jonas “Kold” Andersen officially retired from professional League of Legends after being absent for one year. Kold has been inactive since August 2019, when he...

FlyQuest signs IgNar as new support for the 2020 LCS season

South Korean League of Legends player Lee "IgNar" Dong-geun has joined FlyQuest as the team's new support, the organization announced on Twitter. After having played the 2019 season with the German...

As soon as the 2019 League of Legends World Championship finished, social media and forums filled with rumors surround upcoming roster changes. Some of these rumors will prove to be true, some...

Bjergsen remains with Team SoloMid, returns to LCS stage in 2020

Team SoloMid, one of the most popular and successful esports brands in the world, has announced the resigning of Soren “Bjergsen” Bjerg as mid laner for their League of Legends team. Bjergsen will...
Advertisement

Everything you need to know about the LoL ranking system

Markiplier calls out YouTube after hundreds of fans are banned