The TFT ranked system is back with Patch 9.23, the first update since the release of Set 2: Rise of the Elements.

In Patch 9.22, TFT changed completely. Set 2 introduced new units, synergies, and classes. Riot Games gave players two weeks to adapt and then relaunched the ranked system with a hard reset. Everyone is back in Iron and must play five games to determine their starting point in the new ranked system.

Players that are going through placements will not lose LP if they place fifth or below. Every player that places fourth or above will win LP. The placements will be decided after five games instead of the regular ten games in Summoner’s Rift.

Three Little Legends Series 5 True Damage is now available in the store. Players can purchase Ossia, Melisma, and QiQi, plus an icon for 750 RP each. There are random series five eggs for 490 RP.

Ocean units will receive a small but significant buff in Patch 9.23.

The mana per second goes to all allies, not only the ocean units. Another trait receiving a buff are the Wardens.

These buffs Benefit two units, Thresh and Nautilus. These two are both Ocean and Warden, and can make for a reliable front line. Thresh in particular is a strong champion in the current patch after getting a small buff on his spell.

On the other end of the update are Shadow and Glacial, which are getting nerfs in Patch 9.23.  Shadow slowly became the favorite trait for the players in Patch 9.22, as the early damage was substantial and players running shadow had an easy win.

Playing against six Glacials was frustrating, especially when Olaf was on the board.

Two Glacials still are a reliable combo, getting six Glacial units is not as rewarding. Shadow and Glacial are still good, but not as strong as before. 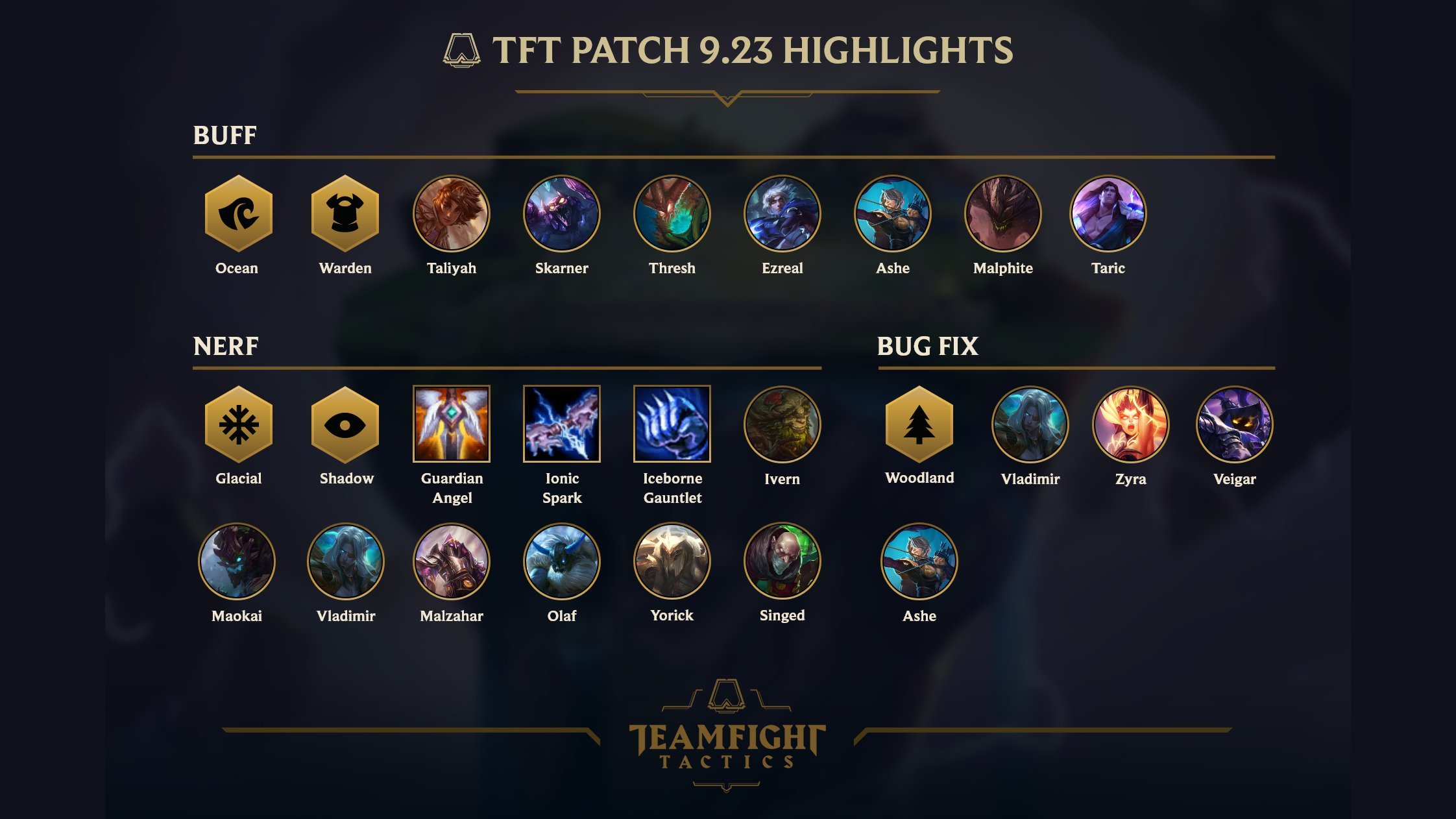 Thresh and Nautilus are getting buffs at three-stars, on top of the Ocean and Warden buff. These will be two of the strongest units in Patch 9.23.

Three of the most used and abused items in TFT will receive nerfs in Patch 9.23. Ionic Spark was a safe source of damage, and players often stacked a champion with three Ionic Spark items to let the items do the job. In Patch 9.23 Ionic Spark is losing some of its power, though can still be stacked on a single unit.

Frozen Heart and Iceborne Gauntlet used to be the perfect counter for players stacking attack speed. The effects of these items will decrease significantly in Patch 9.23.

Stacking two copies or more of these items is a viable strategy, it would require a major investment of items.

New traits and mechanics in TFT: Gizmos and Gadgets intro