FORG1VEN is returning to competitive League of Legends in 2020

Veteran League of Legends player Konstantinos-Napoleon “FORG1VEN” Tzortziou has announced his free agency for the 2020 competitive season after having spent recent years on hiatus due to mandatory military service.

FORG1VEN announced his leave for mandatory duty in the Greek military in February 2016 when he was competing as an ADC for H2k Gaming in the European League of Legends Championship Series, later rebranded as the LoL European Championship.

After an emotional post-game interview in which FORG1VEN shared that he will be leaving for the military, a revelation that put many in the League community on their heels, he was granted temporary deferment of the service and performed at the 2016 World Championship, where H2k finished third.

He then played a few smaller tournaments while waiting for his military service to begin. In April of this year, FORG1VEN shared that he’s free of his service and is open for offers from all regions, as well as for bootcamps and tryouts. He has climbed to the top 10 ranked players on EUW servers just a week after the announcement, showing that the former bot lane star is taking his comeback seriously.

Veteran FORG1VEN ready to come back for 2020 season

But his devotion and hard work in the League’s solo queue haven’t instantly given FORG1VEN a new team, as he stayed unsigned for the rest of the season. He announced free agency through Twitter on October 24, sharing his previous achievements and hoping to find the outlet through which he’ll get to shine on stage again. 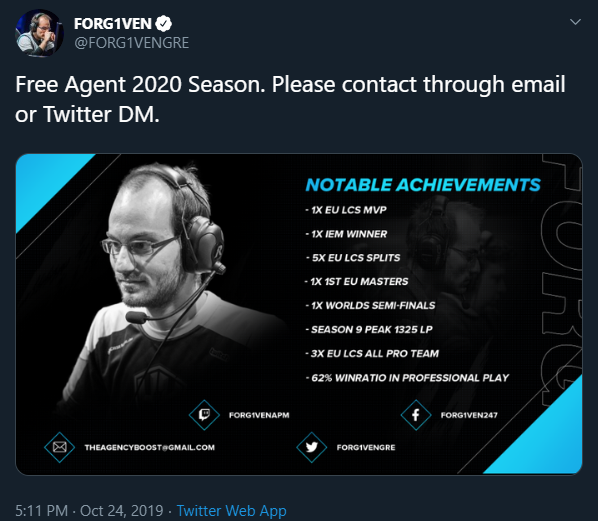 Fans instantly started tagging top tier teams like SK Telecom T1 and Cloud9 to sign him, sharing their excitement over having him back. The more likely scenario is that FORG1VEN won’t get signed to a world-class team straight away, but will instead have to prove himself once again from the lower tiers of the professional scene.