The most OP jungle drops in Dota 2 right now

Ever since their introduction, neutral items have hugely impacted the way Dota 2 is played. While some neutral items give a straightforward boost in different stages of the game, others can completely change how a hero is played.

Included in this list are the most impactful items from each tier.

At first glance tier-one items are insignificant, but in the early stages of a Dota 2 match even the smallest stat boosts can be the difference between a successful team fight and one that’s gone horribly wrong.

Including this item in the list was almost a no brainer. The 200 mana the item gives is already a substantial boost to every hero in the early game. Add to that a respectable 25 movement speed increase and Broach is an item that can make the early game much easier for mana-intensive heroes.

Although the 100 HP boost is one of the weakest among all neutral items, the Trusty Shovel is useful throughout the entire game. Digging can give players a variety of useful items, most notably bounty runes and TP Scrolls. Though this shouldn’t be equipped at all times, every team that finds a Trusty Shovel needs to have a designated digger to equip it every 60 seconds.

Tier-two items are a bit more impactful than their predecessors. These items give significantly greater stat boosts, or more useful active abilities.

Vambrace functions similarly to Power Treads. Players can cycle between three modes, which give an attribute boost as well as another boost to either magic resistance, attack speed, or spell damage. This item is useful for almost every single hero in the game and can even take priority over tier-three items in some situations.

Although it may not look like much on paper and it has a clear downside to it, in the right hands the Clumsy Net can definitely mess somebody’s game up. This item also transitions well into the later stages of the game against enemy heroes with high mobility. That overfed Storm Spirit buzzing around the map or that Anti-Mage that avoids every gank by just blinking away? This can ruin his game. 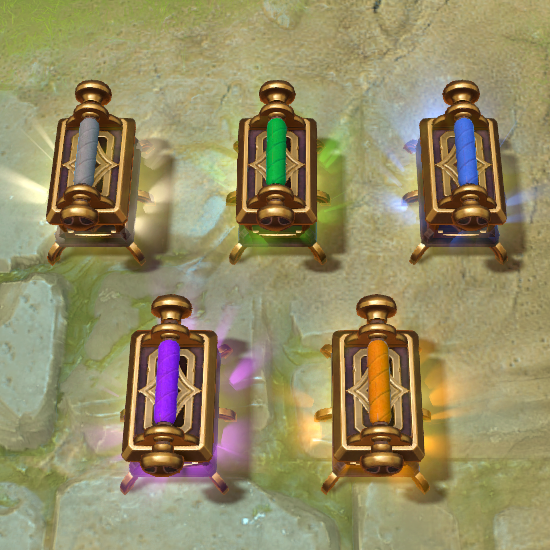 Tier 3: Telescope and Orb of Destruction

Tier-three is where things start to get game-changing. A lot of these items can give a huge edge over opponents if used correctly. Due to the current state of the meta, tier-three items can be viewed as the most impactful as most games are either finished or purely one-sided by this point of the game. Telescope is possibly the overpowered jungle item in Dota 2 right now. Both the 125 additional attack and cast range are hugely impactful on their own. Turn that into a 1200 radius aura that affects all nearby teammates and it becomes an incredibly powerful tool. And on top of all that? It reduces scan cooldown by 50%. Just having twice as many scans as the opponent is ground-breaking on its own. That’s incredibly powerful at all phases of the game to the point where it should probably be a tier-four or even five item. Telescope can flat-out make or break games.

Enchanted Quiver and Paladin Sword can make a strong claim to being the second-strongest tier-three neutral item. In certain cases, those items can fare even better than this one.

The sticking point is that the Orb of Destruction is an excellent item on almost every carry. It performs like a mini Desolator and it provides a huge boost to most right-click heroes. Top that off with a movement speed debuff for chase potential, and this item just ends up being too strong on too many to ignore.

Tier-four items start popping up in late game territory. There are a lot of good items in this tier, and almost every one of them is hugely impactful when applied to the right hero.

The Minotaur Horn is basically a combination of Heart of Tarrasque and Black King Bar. Apart from the 20 strength increase it gives, which equals to a meaty 400 HP on any hero, it offers an active ability that provides a BKB-like block to most magical spells. And with a cooldown that’s more than twice as low as BKB’s, this item must be your go-to whenever you’re in a tight position.

The Leveller takes overkill to a whole new level. For many carries, this is the clear best tier-four item. The +60 attack speed increase is scary on just about every right-click hero out there, but don’t forget the +25% extra building damage the item gives. That can turn everyone into a potent split pusher and can let strong pushing heroes melt entire lanes in seconds.

Everything players know about Dota 2 goes out the window when tier-five items start popping up. Almost all of the items in this category can be seen as overpowered in one way or another.

Of course it was gonna be Apex. An increase of 75 to a hero’s primary attribute turns everyone into a force. Although there is no active ability, the statistical boost is so substantial that players will either be nigh-unkillable as a strength hero, cut down enemy heroes in a blink as an agility hero, or just spam spells with an almost undepletable mana pool as an intelligence hero. In most cases, the Apex is the way to go!

As for Mirror Shield, it honestly feels like IceFrog was trolling Dota 2 players. It’s a Linken’s Sphere on steroids.

The Mirror Shield gives a well-rounded stat boost together with a passive that completely changes the way the enemy approaches the user. Instead of just nullifying spells,  it reflects them back at the caster the same way Anti Mage’s Counterspell does.

Breaking down the comparison between Dota 2 and League of Legends

How to recalibrate your MMR in Dota 2

ana reportedly looks to make Dota 2 return, but not with OG