From over four million players that participated in Worlds Pick’ems, there are only three left that still have a chance for a perfect score. With their final picks different, it’s now assured that at least one player will grab the Worlds 2019 perfect pick cache.

Over a month after the first League of Legends 2019 Worlds Championship match was played, the tournament is finally coming close to an end. Only the finals are left to be played, and G2 Esports will be clashing against FunPlus Phoenix for the world championship crown.

LoLEsports Stats shared on Twitter two out of the three remaining players with the perfect Pick’ems score so far have predicted G2 to win the finals. One picked FPX. 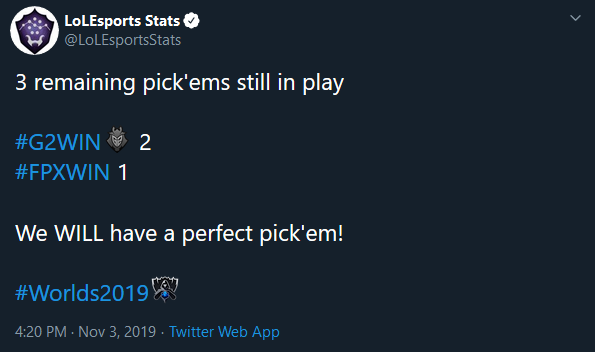 Unlike last year when out of three million players no one reached the maximum possible points, this year’s picks are sure to give us a winner. Whether the two that picked G2 or the one that picked FPX will be awarded the perfect pick cache remains to be seen after the final games are played this weekend. The cache includes five ultimate skins for in-game use in League of Legends.

The predictions of the three players that are still standing have earned them 104 points thus far. The 20 more they need for a maximum of 124 points will be given based on a correct finals prediction.

Overall, Pick’em predictions didn’t go well for most of the players. The majority sit low on the leaderboard, where they earned up to 30 points. Closer to the top are five more players with 99 points, but even these players are far from the perfect run.

G2 and FPX to meet in 2019 World Championship finals

European and Chinese fans alike are excited for the upcoming finals. With a massive support from the local European audience, G2 will be looking to take the trophy playing on home soil. But FPX isn’t planning to back down either, as they want to prove China to be the best League of Legends region for another consecutive year.

The finals will be played on November 10 at the AccorHotels Arena in Paris.

The 2020 League of Legends season is coming to an end after an incredible 2020 World Championship. On that occasion, it’s time to present the first WIN.gg LoL rankings for the 10 best teams in the...

A total of 230 players are still in contention of getting a perfect Pick’Em for the 2020 World Championship going into the semifinals. This year’s Pick’Em competition is different from previous...

Each year, League of Legends players look to prove their knowledge and try their luck with the Worlds Pick’Em. This year, only one person was perfect throughout the event. Not many League fans...

With the 2019 League of Legends World Championship coming to a close, only 34 Pick’ems still have a chance for perfect picks all-around. They predicted it will be Invictus Gaming and SK Telecom T1...

Less than 0.001% players have chance for perfect Worlds Pick'em

With the 2019 League of Legends World Championship quarterfinals finished, the semifinals stage is set for the four remaining teams. Fans have been trying their luck with Pick’ems, but very few...
Matches
Time zone: UTC (GMT 0)
Advertisement

League of Legends All-Star Event is returning in December

LoL Clash returns in December for final beta test before 2020