Ultra Rapid Fire mode, or URF, is one of the most popular game modes in League of Legends. Due to its chaotic nature, Riot Games implemented a few balance updates for a smoother style of play.

Many League players’ favorite game mode went live a few days ago. Riot’s technical game designer Geoff Marsi shared on Twitter that URF has been patched with a few balance changes on October 30. This micropatch, as Marsi has called it, buffed Pyke and Rammus while nerfing a number of units.

Cassiopeia, Fiora, Katarina, and more up for nerfs

Although URF is all about fun and spamming champion’s spells, it’s important to keep it balanced, so that a few champions wouldn’t be consistently dominating the Rift.

To make Cassiopeia less annoying to fight against and less easy to win with, Riot decided to reduce her damage and healing. Fiora was met with the same fate, while Kalista has only gotten her damage punished. Katarina will be dealing less damage and taking more of it.

Dark Harvest is the only rune to receive changes in this URF micropatch. Riot decided to lower the base damage and the attack damage ratio Dark Harvest gives when equipped in the game mode. 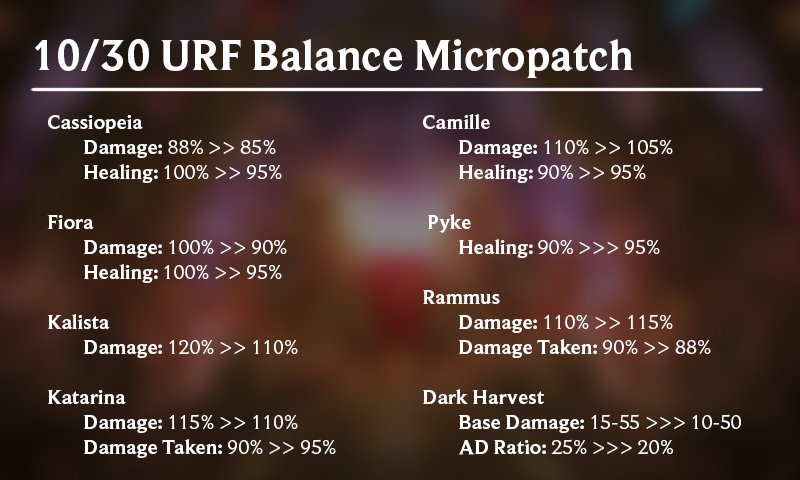 The two lucky champions to receive a buff were Pyke and Rammus. Being as tanky as he is, Rammus is now taking more damage than ever before, but he can also deal more damage, making rolling around the map more worthwhile and helping to bring a potentially entertaining champion to URF more often. Pyke has fallen behind his peers as well, so the micropatch gave him more damage and more healing.

Many of the players commented on the changes asking why there haven’t been any updates to common URF picks like Fizz, Zed, or Shaco, to which Marsi responded by saying their win rates aren’t high enough to be seen as alarming. Players can, however, expect a few more minor patches like this one as long as the game mode is live.

Cassiopeia has the highest win rate in top lane on LoL patch 11.15