Astralis’ dev1ce is latest pro to speak out against Krieg

Astralis star Nicolai “dev1ce” Reedtz is among the Counter-Strike: Global Offensive pros who are frustrated with the SG553, also known as the Krieg.

In a story posted to Instagram, dev1ce voiced his displeasure with the current power of the rifle, questioning whether it’s even worth buying the AWP with its pervasiveness in the current meta.

“Tough night for me personally, struggling to awp against the kriegs. Not quite sure if it’s even worth to buy the awp that much anymore,” he said.

Other pros across CSGO have voiced their own concerns about the Krieg. Several took to Twitter last week to discuss the effects the gun has had on the game of late. Astralis teammate Peter “dupreeh” Rasmussen also tweeted that the Krieg meta is getting out of hand not long after dev1ce posted 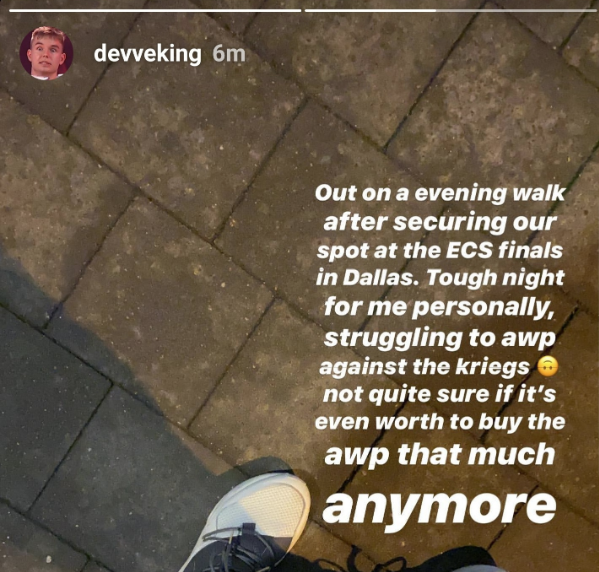 Is the Krieg really as overpowered as the Astralis players say?

The SG553 is a scoped assault rifle that is exclusive to the T side. It is available for $2,750, just $50 more than the cost of the AK-47. That offers a scope, manageable spray, and a guaranteed kill with a headshot for a very low price.

The scope also enables players wielding the weapon to find more success against AWPers in long-range fights. The AWP costs $2,000 more than the SG553 and offers only $100 as a kill reward, compared to the SG553’s $300.

The AUG, the similar option available to the CT side, was repeatedly nerfed after pros adopted it en masse during and after the IEM Katowice Major. Despite pro players griping about the SG553, the AK-47 is still the go-to assault rifle for the majority of CSGO pros.

Valve have not commented as of yet as to whether they will nerf the weapon, by either tweaking its power or increasing its cost. That extra economic investment may bring the weapon back into balance as players would only choose to invest the extra money in certain situations.

While dev1ce is experiencing frustration it is not slowing down Astralis, who look quite strong of late.

dev1ce may return to Astralis after breakup with girlfriend

CSGO players want Krieg nerfs, but it’s only getting stronger

Modder creates Source 2 port of CSGO before Valve does

s1mple says that Mirage haters know nothing about CSGO

Why is the rox Holo signature such an expensive CSGO sticker?

This new tool is basically a legal maphack for CSGO