Did Valve just reveal the secrets behind Juggernaut's face?

Dota 2 fans have asked themselves this exact question on many occasions, as the iconic hero’s mask is central to his character. While Valve doesn’t seem all that interested in actually answering that question, but the publisher has always been keen to keep fans intrigued with Dota 2’s dizziest swordsman.

This has come up on a few occasions in the past, but The International 10 Battle Pass added some new fuel to that fire.

The Cavern Crawl is one of the biggest features of the battle pass each year, tasking players to win games as a number of different heroes. There are a variety of challenges that can be completed using these different heroes, typically with the thread connecting them together being the heroes' physical appearance.

Juggernaut is a part of several of these challenges, but he isn’t described as having “great pecs” or anything of that sort. Instead, he’s a part of numerous challenges related to his mysterious face.

According to the TI10 Battle Pass, Juggernaut joins Sniper and Phantom Lancer as being luxuriously bearded, joins Razor and Morphling in having no nose, and has bad teeth ljust ike Lifestealer and Bloodseeker. This has inspired some laughs across social media, as well as some hilarious fan art. 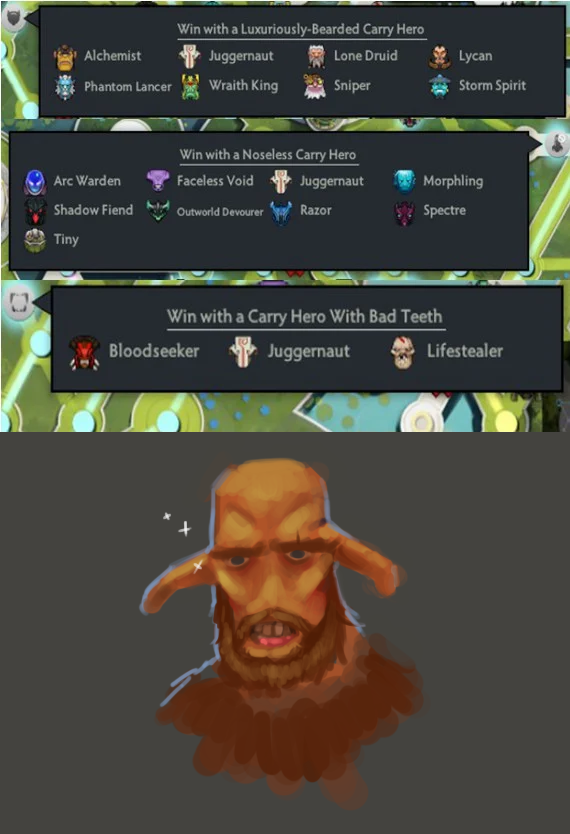 Does the TI10 Battle Pass reveal what Juggernaut’s face look like?

So does Juggernaut actually look like that? Or is Valve just trolling Dota 2 players a little bit? The answer is probably more the latter than the former.

From a strictly literal perspective, Juggernaut doesn’t actually have a face in the Dota 2 game client. He barely even has a head. Though many masked heroes such as Bounty Hunter have a fully rendered face behind their mask that can be seen when the game bugs out and removes parts of character models, when Juggernaut’s mask disappears, only a lump with eye sockets remains.

From a lore perspective, it’s very possible that Juggernaut doesn’t even have a face. Various media has alluded to Juggernaut’s mask being an extension of his body, or some sort of spiritual connection to his ancestors.

The Bladeform Legacy arcana for Juggernaut hovers around the idea of his mask being broken, with the description being “Yurnero’s mask has been cleaved in two, awakening the ancient souls that once laid dormant inside it. These spirits have become one with Yurnero, giving him both the wisdom and fury of his ancestors.”

The Immortal Treasure 2 has finally arrived in The International 10 Battle Pass. The long-awaited case has landed in Dota 2, bringing with it a new set of fancy skins for Dota 2 fans with...

The International 2020 Battle Pass is coming soon, in one form or another. Fans of Dota 2 are excited over this fact for a multitude of reasons, but one of the most excited groups is Dota 2...

We finally know what Juggernaut's face looks like under his mask

At one point or another, every Dota 2 player has asked themselves, “What does Juggernaut look like under the mask?” Many Dota 2 heroes that wear masks or face-covering helmets have had their faces...

Frostivus has arrived in time for Christmas and it brought an extra special gift with it. Dota 2’s holiday-themed event is back in 2019, bringing with it a number of rewards for players. While...
Advertisement

Valorant dev shuts down cheaters looking to get unbanned at launch

Dupreeh fires back at Astralis critics after string of losses

LIRIK was banned from Twitch for just 42 minutes, and this is why